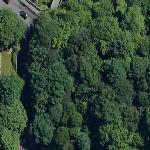 What's left today:
As mentioned above, the station buildings were demolished in 1971. The station platforms are still there, but togehter with the trackbed are badly overgrown. The railway bridge that once carried the railway over the road has been removed, but the abutments still remain. The station site is hard to access as the bridge has been removed, the tunnel portal futher down the line has been blocked (this tunnel leads to the Botanic Gardens Station), which has been block at both tunnel portals, as the portal after the Botanic Gardens Station has been blocked too.
Links: www.kilmeny.vispa.com, en.wikipedia.org
390 views