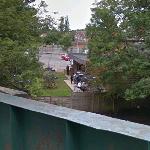 By Drudii @ 2013-07-20 04:39:01
@ 53.830372, -1.430574
Scholes, United Kingdom (GB)
DATE OPENED: 1 May 1876
LOCATION: South side of Station Road
COMPANY ON OPENING: North Eastern Railway
DATE CLOSED TO PASSENGERS: 6 January 1964
DATE CLOSED COMPLETELY: 27 April 1964
COMPANY ON CLOSING: British Railways (North Eastern Region)
PRESENT STATE: The station building is extant but much altered for its current role as a pub and restaurant. The station building has been extended across the platform between the two wings, and a new canopy is fitted to the front of the extension. The cast iron pillars that supported the old verandah have been retained inside the new extension. A new canopy was fitted to the front of the building above a former carriage that was used as a restaurant. The carriage has been removed and the canopy has been converted into a new restaurant. The trackbed has been filled up to platform level and a small section of the up platform edge is visible. The goods yard has been cleared to make a car park.