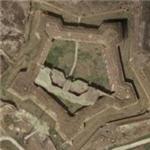 By kjfitz @ 2012-02-05 18:56:46
@ 30.227999, -88.022756
Gulf Shores, Alabama (AL), US
Fort Morgan is a historic masonry star fort at the mouth of Mobile Bay, Alabama, United States. Some scholars regard it as "one of the finest examples of military architecture in the New World." The post was named in honor of Revolutionary War hero Daniel Morgan. Construction was completed in 1834 and it received its first garrison in March of the same year.

Fort Morgan is at the tip of Mobile Point at the western terminus of State Route 180 (Alabama). It and Dauphin Island, on which Fort Gaines is situated, enclose Mobile Bay. The Alabama Historical Commission maintains the site.
Links: en.wikipedia.org
1,835 views