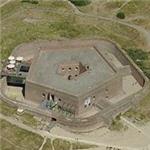 By kjfitz @ 2007-05-28 01:29:06
@ 51.239046, 2.934308
Ostend, Belgium (BE)
The 'Fort Napoleon' in Oostende is the only still completely intact Napoleonic fortress left in Europe. The 'Fort' stands in the dunes north of the city center. In 1810 Napoleon Bonaparte, then Emperor of France, had it constructed during the French occupation of Belgium. Five hundred Spanish prisoners of war had to build it together with bricklayers from the Oostende area. The fort was finished by September the 26th 1812 . A total of 8.800.000 bricks were used for a construction space of 8.772 m³. The Fort Napoleon could house a garrison of 260 soldiers. It was defended by 46 canon-guns. In the Second World War, it was used as barracks for the German officers, later it became a playground for the local schools. It now serves as a training ground for climbers
Links: nl.wikipedia.org
7,589 views