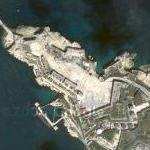 The vast 'Roman' sets of the movie Gladiator (with CGI additions) were constructed on the massive remains of Fort Ricasoli on Malta, later used for the filming of Troy. [movie-locations.com]
Links: en.wikipedia.org, gameofthrones.fandom.com
5,816 views