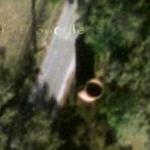 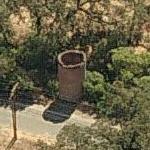 By kjfitz @ 2006-06-02 17:33:56
@ 37.395944, -122.162375
Palo Alto, California (CA), US
Steve Staiger of the Palo Alto Historical Society says that whoever finally figures out the original purpose of Frenchman's Tower will get their 15 minutes of fame--at least in Palo Alto. This approximately two-story brick tower looks a lot like a displaced castle turret, except that its gothic-arched windows are all bricked over. Reportedly built in the late 18th century by the Peninsula's celebrated French pioneer, Peter Coutts, the tower now stands guard right off of Old Page Mill Road. A barbed-wire fence and "Private Property" sign encourages would-be puzzle-solvers to keeping their hypothesizing to the public side of the fence--as if the clump of poison oak clinging to the tower wasn't incentive enough. [metroactive]
Links: www.flickr.com
2,598 views