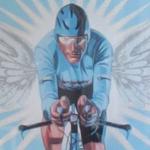 Hincapie is most widely known as a key domestique of Lance Armstrong, having been the only rider to assist Armstrong in all seven of his Tour de France victories. Hincapie was also a domestique for Alberto Contador in 2007 and for Cadel Evans in 2011, when both men won the Tour de France. He is one of only two riders in Tour de France history to have raced on nine Tour-winning teams. Hincapie completed his 17th and final Tour in 2012, which is a record.
Links: en.wikipedia.org
973 views