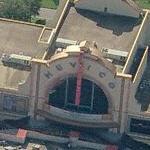 Based in Fort Lauderdale, Florida, Muvico has ten complexes in Florida . Muvico has also expanded out of the state Florida to include a complex's in Maryland (see Arundel Mills), Tennessee and soon East Rutherford, New Jersey. Muvico theaters are known for the themes that several theaters have, such as the Egyptian theme, the 50's drive-in theme, the French opera house theme. They are also known for the Premier Bar, which is currently at Centro Ybor 20, Parisian 20, Coconut Point, and Boynton Beach locations. The Palace 20 goes even further with a full scale restaurant on top of the theater.
Links: en.wikipedia.org
4,975 views