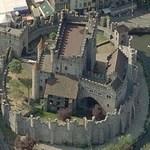 The present castle was built in 1180 by count Philip of Alsace and was modelled after the crusaders castles the count encountered while he participated in the second crusade. Before its construction, their stood a wooden castle on the same location, presumably built in the ninth century. The castle served as the seat of the Counts of Flanders until they abandoned it in the 14th century. The castle was then used as a courthouse, a prison and eventually decayed. Houses were built against the walls and even on the courtyard and the stones of the walls were used to erect other buildings. At one time it even served as a factory. At the end of the 19th century, the castle was scheduled to be demolished.
Links: en.wikipedia.org
1,428 views