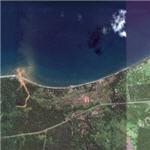 By kjfitz @ 2011-02-01 16:32:20
@ -9.434065, 160.108352
Ndondo, Solomon Islands (SB)
On August 7, 1942, Allied forces, predominantly American, landed on the islands of Guadalcanal, Tulagi, and Florida in the southern Solomon Islands with the objective of denying their use by the Japanese as bases to threaten supply routes between the U.S., Australia, and New Zealand. The Allies also intended to use Guadalcanal and Tulagi as bases to support a campaign to eventually capture or neutralize the major Japanese base at Rabaul on New Britain. The Allies overwhelmed the outnumbered Japanese defenders, who had occupied the islands since May 1942, and captured Tulagi and Florida, as well as an airfield (later named Henderson Field) that was under construction on Guadalcanal.
Links: en.wikipedia.org, history.army.mil
1,529 views