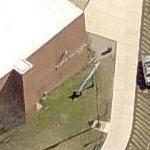 "It was a great thing," said Noguiera. "And it cost us nothing."

Gunther had the rocket shipped to the school after he found it among Army surplus stored at the Red River Army Depot in Texarkana, Texas. The old rocket -- a 12-foot bullet-shaped structure -- was moved and now sits at the entrance of the school's athletic field. It came from the Earle Naval Weapons Station. A student who graduated in the 1960s built it for an Eagle Scout project, according to Noguiera.

When the new rocket arrived it was Army green and was repainted in the school's colors -- green and white. In early December 1995 it was officially unveiled to the public. Today it sits in front of the school, atop two metal poles and concrete pillars.
Links: www.injersey.com
1,533 views