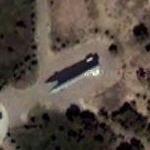 The MR-UR-100 project was developed by OKB-586. The purpose was to develop a MIRV capable replacement for the existing UR-100 missiles in service. While designed to fit into existing UR-100 silos, it still required some modification of existing silos to accommodate the new missile, due to its requirement for a cold-launch system.

The development of "modernized UR-100" was authorized on 19 August 1970 (document №682-218) and assigned to both OKB-586 and TsKBM (author of UR-100). Flight tests were conducted from 1971 through 1974. Deployment commenced in December of 1978. The more advanced MR-UR-100UTTh version began development in 1979, with flight tests from 1977 through 1979. The new missiles had completely replaced the original version by 1983, at which time the Soviets fielded 270 launchers. From there the number of launchers declined, and by 1991 START I Treaty they were down to 76. All were scheduled for dismantling and removed from the inventory. [wikipedia]
2,148 views