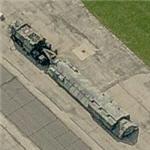 By kjfitz @ 2007-08-16 14:27:13
@ 39.785499, -84.106763
Dayton, Ohio (OH), US
This vehicle was the last engineering model, or Engineering Test Unit, of a mobile, radiation-hardened, truck launcher designed to carry and launch the MGM-134A Small Intercontinental Ballistic Missile (unofficially known as the 'Midgetman'). It can travel up to 55 mph on the highway, and it can also travel off the road. The vehicle is capable of using the trailer-mounted plow to dig the launcher into the earth for additional protection from a nuclear blast.

The ETU tractor-launcher combination weighs 239,000 pounds and has a draw bar pull capability of more than 80,000 pounds. It is powered by a 1,200-hp Rolls-Royce Perkins diesel engine that drives all eight tractor wheels through an electro-hydraulic transmission.

The ETU was designed and built by Boeing Aerospace and Electronics and by Loral Defense Systems Division. It was delivered to the USAF in December 1988 and tested until 1991 at Malmstrom Air Force Base, Mont.

The museum acquired it in 1992 after development of the MGM-134A SICBM was canceled.
Links: www.nationalmuseum.af.mil
2,610 views