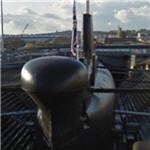 HMS Ocelot paid off in August 1991 as the conventional submarine fleet of the RN began to decline, making way for the nuclear fleet. She was sold in 1992 and preserved as a museum in Chatham Historic Dockyard.
Links: en.wikipedia.org
860 views