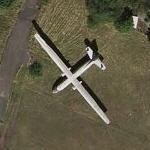 By kjfitz @ 2007-08-30 11:12:48
@ 48.955462, 2.422851
Paris, France (FR)
The Hurel-Dubois HD 34 is a French photographic aircraft developed from the Hurel-Dubois HD 321 for use by the Institut Geographique National. Modifications include an extension to the front fuselage to accommodate a photographer/navigator in the extreme nose and the fitting of two vertical cameras and two oblique cameras. The Hurel-Dubois HD 34 carries a crew of five, including tow camera operators and increased fuel to allow an endurance of fourteen hours flying time.
Links: www.probertencyclopaedia.com, www.airliners.net
902 views