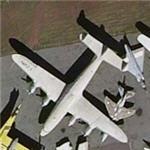 By kjfitz @ 2007-08-30 11:23:45
@ 48.954779, 2.422613
Le Bourget, France (FR)
The Lockheed Constellation, affectionately known as the “Connie”, was a four-engine propeller-driven airliner built by Lockheed between 1943 and 1958 at its Burbank, California, USA, facility. A total of 856 aircraft were produced in four models, all distinguished by a distinctive triple-tail design and graceful, dolphin-shaped fuselage. It was used as both a civilian airliner and U.S. military air transport plane, seeing service in the Berlin Airlift and as the presidential aircraft for President Eisenhower.
557 views