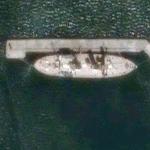 By Hinkkanen @ 2006-02-02 10:09:46
@ 59.455025, 24.73774
Tallinn, Estonia (EE)
Icebreaker Suur Tõll is the largest preserved steam icebreaker in the world. She was built by the Vulcan Werft, Stettin 1912-14 for the Russian government as the Tsar Mihhail Feodorovits. During the Russian Revolution she was renamed Volynets and in March 1918 she was captured by the Finns and renamed Wäinämöinen. She was then handed over to Estonia in 1922 and again renamed. Now she became Suur Tõll after a mythological hero from Saaremaa. In 1940 she was captured by the Soviets and became Volynets again and served until early 1980's. Today she ibelongs to Eesti Meremuuseum (Estonian Maritime Museum) and is currently undergoing restoration.
Links: www.shipgaz.se
1,262 views