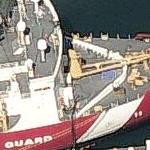 The Polar Class icebreakers are two of the largest cutters operated by the Coast Guard. These cutters, specifically designed for open-water icebreaking have reinforced hulls, special icebreaking bows, and a system that allows rapid shifting of ballast to increase the effectiveness of their icebreaking. The Polar Sea and Polar Star were built in the 1970s. They serve in Arctic/Antarctic serving science and research as well as providing supplies to remote stations. Both Polar Class icebreakers are under the control of Pacific Area, Ice Operations Section.
Links: www.uscg.mil
1,551 views

If it is a 10 then this is a differnt shot of the same ice breaker that is in dry dock to the SW. If it is 11 then this is the sister ship as identified.

Birds eye view shots on N/S orientation are usually taken on dates much distant from the E/W oriented pictures so it wouldn't be to surprising to see pictures of the same transient vehicle twice.