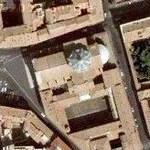 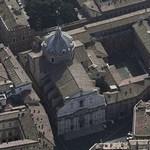 By DonMartini @ 2006-03-09 04:53:44
@ 41.895908, 12.479873
Rome, Italy (IT)
Il Gesù (The Church of the Holy Name of Jesus) is the Jesuit Mother Church. It occupies the site St. Ignatius chose for his headquarters shortly after he founded the Society of Jesus in 1540. That year Pope Paul III Farnese gave the Society a small neighborhood chapel, Santa Maria della Strada (Our Lady of the Wayside), which although conveniently located, soon proved much too small for the expanding order. Ignatius' dreams for a large and appropriate church-headquarters were not realized in his lifetime. It took over 40 years, three foundation-stone ceremonies, and six architects (Nanni di Baccio Bigio, Michelangelo, Vignola, Giacomo della Porta, and Jesuits Giovanni Tristano and Giovanni de Rosis), before Il Gesù was consecrated in 1584.
Spiritually, Il Gesù incorporates Jesuit values and articulates Catholic doctrine as reaffirmed by the Counter Reformation. Architecturally, it marks a transition between Renaissance and Baroque. The plan of the Gesù became the model for Jesuit churches throughout the world.

Il Gesù stands in the heart of downtown Rome, on one of the city's busiest and noisiest intersections. It is a meeting place for all classes and generations of the city's population.
Links: www.initaly.com
1,145 views