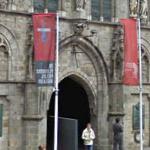 By kkeps @ 2011-11-25 09:42:57
@ 50.850854, 2.885471
Ypres, Belgium (BE)
The In Flanders' Fields Museum is devoted to the study of World War I and occupies the second floor of the Cloth Hall, Ypres in Belgium. The building was virtually destroyed by artillery fire during the Battles of Ypres and has been reconstructed. The curator, Piet Chielens, is a World War I historian. The museum is named for the famous poem by Canadian John McCrae.

Visitors to the museum will find no glorification of war; rather the museum suggests the futility of war, especially as seen in Flanders in World War I.
Links: www.inflandersfields.be
654 views