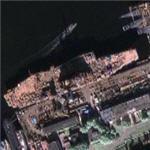 The Vikramaditya is a modified Type 1143 Kiev class aircraft carrier built in 1978-1982. The ship is presently being extensively refitted at Sevmash shipyard in Russia. It is projected to replace India's only aircraft carrier, INS Viraat.
Links: en.wikipedia.org
1,355 views