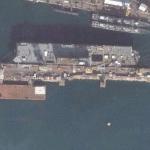 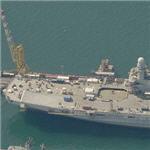 The ship is designed to combine V/STOL and helicopter air operations, amphibious operations, and the transport of military or civil personnel and heavy vehicles. The 134 metre, 2,500 m² hangar can double as a vehicle hold, fitting up to 24 tanks or many more lighter vehicles, and is fitted with side access ramps as well as two elevators.

She is named after the Italian politician Count Camillo Benso di Cavour. Initially she was to be named after Luigi Einaudi, then after Admiral Andrea Doria. When Cavour becomes operational, it will become the Nuova Unità Maggiore (NUM, or New Main Unit) of the Marina Militare, complementing, and eventually replacing the Giuseppe Garibaldi.
Links: en.wikipedia.org
14,543 views