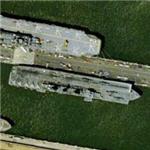 By kjfitz @ 2007-05-30 17:18:26
@ 36.949928, -76.330218
Norfolk, Virginia (VA), US
The HMS Invincible class of aircraft carriers were designed to replace the early post-war aircraft carriers that were HMS Ark Royal and HMS Hermes. They have had a troubled life, with the government threatening to sell off two of the three carriers before they had even been commissioned. As the carriers were coming into service during the early eighties (HMS Invincible, the first of class, saw action in the Falklands) there were worries about whether Britain would be able to continue its role as a balanced Navy, rather than the ASW wing of NATO. The Falklands conflict proved the need for carriers and so the Invincible class were here to stay.

The carriers were originally designed as through-deck cruisers, without the now characteristic ski ramp, with the Sea Harrier FRS Mk1 in mind. During operational tests, however, it was discovered that using the ski ramp provided the Sea Harrier with far better performance, allowing it to carry more fuel and weapons, making it a far more versatile aircraft for fleet defense. The upgrade of the FRS Mk1, the Sea Harrier FRS Mk 2 has been a greatly successful fighter, and will continue to do its job for a few more years.

The third of class, HMS Indomitable, was later renamed HMS Ark Royal so as to continue the tradition of having an aircraft carrier in service named Ark Royal. The original Ark Royal was a British galleon of 800 tons built for Sir Walter Raleigh in 1587. She was the flagship of Lord Howard at the battle against the Spanish Armada in 1588. The name Ark Royal was later employed for a British aircraft carrier built in 1937 and sunk in 1941 by the German submarine U81.

Future refits of the Invincible class will include the removal of the Sea Dart missile system, to be replaced by a weapons lift and increased hangar and deck space.

During the 1982 Falklands conflict, the task force had accomplished two of its main tasks by mid-May: the movement of the troops safely to the South Atlantic and the establishment of control of the seas around the Islands. The role of the carriers, HMS Hermes and HMS Invincible, was crucial at this and subsequent stages in providing air defence and the means of attacking enemy ships and ground positions, while their helicopters provided constant anti-submarine protection.
Links: www.globalsecurity.org
12,284 views