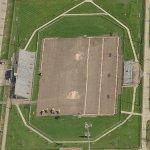 Ameche played six seasons with the Baltimore Colts, earning the NFL Rookie of the Year award in 1955 and scoring the game winning touchdown in the 1958 NFL Championship Game in overtime.

The field not only features local high school football games, but has been home to a few semi-pro, minor league, and women's football teams.
Links: en.wikipedia.org
2,271 views