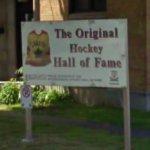 After not having a building to host the Hall of Fame by 1958, the NHL would withdraw their support and created the current Hall of Fame in Toronto.

The IHHF continued on without the NHL's help and moved into this building in 1965. They are proud to call themselves "The Original Hockey Hall of Fame".
Links: www.originalhockeyhalloffame.com
447 views