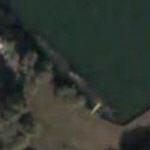 The transport of the 46 mts lng and 350 tons submarine, took one week.

This picture was taken about 500 meters to the NE.

The Toti took to sea in 1968, the first Italian submarine to be built after World War II. Its mission was to hunt out and destroy Russian nuclear missile launchers. But the lifting of the Iron Curtain together with rapid technological change effectively grounded the vessel, and in 2001 the Italian Navy bequeathed it to the museum, which already had an important transportation collection.


That year, the Toti sailed up the Adriatic, and then took to fresh water, navigating along the Po, Italy's longest river, until it arrived in Cremona. A planned two-month hiatus in the port turned into a four-year soap opera as engineers and local lawmakers fretted that the costs and technical difficulties of moving the cumbersome 536-ton craft would be too much to bear.
812 views