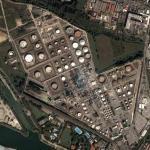 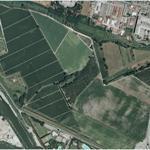 The refinery receives crude oil at the port of Genoa. Crude oil discharged at Genoa, for Tamoil, is pumped through the Genoa-Ferrera-Cremona pipeline to a storage plant at Ferrera, and then pumped to Cremona.

Instead of distillation units and storage tanks there are trees and fields!
This effect you can see at any refinery places in Italy in LL!!
1,370 views