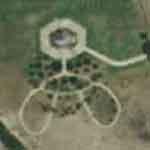 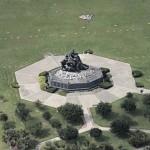 By mlc1us @ 2006-12-15 13:08:23
@ 26.222809, -97.668129
Harlingen, Texas (TX), US
Located on the grounds of the Marine Military Academy is the Iwo Jima Monument. The Iwo Jima Monument is the original full-sized creation of the renowned artist and sculptor, Dr. Felix de Weldon, and was used for the casting of the monument erected at Arlington Cemetery outside Washington, D.C. After completion of the monument this sculpture was placed in storage until the early 1980's when its creator donated it to the Academy. Donations were collected to fund the transport and reassembly of the monument, which was supervised by its creator and on 16 April 1982 the monument, was officially dedicated. The Visitors Center contains photographs documenting this event as well as a signed photograph of the monument on which the sculptor officially donated this "original" monument to the Academy.

Beside the Iwo Jima Monument in Harlingen, is also the site of the grave of Harlon Block, a native of South Texas, and one of the second, well-known Iwo Jima Flag Raisers.
744 views