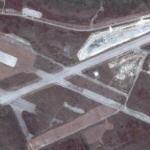 The airstrip on the Orote Peninsula played a critical role in the American invasion strategy. Once troops secured Asan and Agat beaches, they were to advance and merge to isolate the peninsula and the airstrip. The Japanese expected this and reinforced the peninsula with defense positions and (haphazardly) placed landmines along existing roads.

Three weeks prior to landing, extensive air raids were carried out in an attempt to secure Asan and Agat beaches, where American Armed forces were to begin their initial assault. The offensive strategy, now apparent to the Japanese, was to land on Asan and Agat beaches and unite these forces by capturing the Orote Peninsula. The Orote Peninsula was edged with 200-foot cliffs overlooking the two beaches. It also contained the only functional airfield, crucial in order to secure and cut off Japanese supplies, and to bring in additional American supplies.

After four days of continuous battle, the enemy was surrounded on the Orote Peninsula.

On July 28th the airstrip on Orote Peninsula was secured.
Links: www.nps.gov
2,656 views