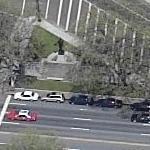 Artigas (1764-1850) is sometimes referred to as the "father of Uruguayan independence." He raised troops of volunteers to fight for the creation of a Uruguayan state separate from Argentina and free of Spanish domination. An admirer of the young United States, he is said to have carried a copy of the American Constitution with him at all times. Engraved at the base of the statue is the statement: "Liberty of America is my dream and its attainment my only hope."

The statue was funded in great part by contributions from Uruguayan school children.
Links: en.wikipedia.org
927 views