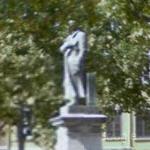 The statue was erected to him on the site where his 1801 exhibit loom was destroyed.
Links: en.wikipedia.org
490 views