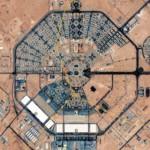 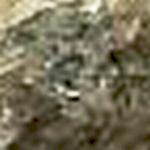 By romulusnr @ 2005-07-05 18:31:52
@ 27.98192, 45.545454
Ahhad Rafidah, Saudi Arabia (SA)
Beginning in 1951, the Trans-East and Gulf Districts of the former Mediterranean Division, U.S. Army Corps of Engineers, carried out U.S. government-sponsored construction projects in the Middle East. By the mid-1960s, Saudi Arabia requested the Corps’ expertise on mass communications projects and the construction of Saudi military infrastructure, all of which they funded. On April 20, 1976, the Middle East Division (MED) was formed to oversee this construction program in Saudi Arabia, which by that time had become extensive.

The jewel of the entire Saudi program was the construction of King Khalid Military City (KKMC), a massive base designed to house more than 70,000 personnel. It alone cost $8.5 billion. KKMC was built as an octagonal-shaped city with houses and apartments in its northern section, command, recreational, and training facilities for three brigades in its southern sector, and a commercial city center area that also contained schools and a mosque. This was the single largest military construction project in Corps history and required the awarding of more than thirty large contracts.
Links: www.globalsecurity.org
4,742 views