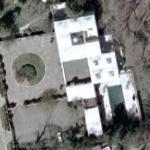 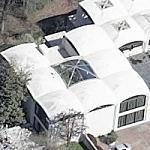 The Kreeger Museum (1967) is a modern building that has a timeless quality. American architect Philip Johnson, with Richard Foster, accomplished this by making obvious references to the past and combining those with a modernist vocabulary - designed as a residence for David L. and Carmen Kreeger.

Johnson and Foster were challenged to create a structure that could serve as a residence, a museum, and a recital hall. The modern building that they designed not only fulfills these functions, but also has an classical style. To achieve this, Johnson and Foster blended modern features with historic quotes. For example, the domes of the structure allude to Byzantine monuments like the Hagia Sophia. As you move through the building, you will notice transitions from small to large spaces. This was inspired by Egyptian tombs. The use of the module, the 22 ft. cube that is the basis of this building, dates back to Roman architecture. (The Great Hall, for example, is three modules long.) The result of these historical references is a structure that seems timeless.

The Kreeger building can be seen as one of Johnson’s early forays into postmodernism. It possesses all of the characteristics: drawing upon earlier monuments, suited to both the site and the needs of the clients. The Kreeger is organized around a modular system. Every room is some variation of 22x22x22 ft. This use of a proportional system dates back to ancient Greek buildings like the Parthenon. Travertine, the stone used for the building, is the same material used to face the Colosseum in Rome. This material, which is often mistaken for marble, is a form of limestone. To soften the harsh vertical and horizontal lines of the building, a feature that would be celebrated in a modern building, Johnson used domes, which give the structure a Byzantine feeling. Inside, in the lunette windows of the Great Hall, Johnson created screens from cork balls. These filter light and soften noise in the building. The inspiration for these screens came from Johnson’s trip to Egypt. These screens mimic the wooden window screens used in many Middle Eastern countries. When one stands on the Sculpture Terrace, one senses Johnson’s debt to the architects of Renaissance Italian villas, which blend classical forms into the landscape.

While designing this building, Johnson had to create a structure that could be a residence, gallery space, and concert hall. Thus, the domes have not only an aesthetic function, but an acoustic one as well. In the Great Hall, they create a natural amplification system that allows one to hear a concert perfectly from any space in the room. The walls are covered in a natural cotton carpeting that also helps with the acoustics by softening any harsh sounds. It also allows paintings to be moved with ease, as any holes in the wall are hidden and repainting is not necessary.

Converted from a residence in 1994, the Kreeger Museum building was designed, in 1963. The structure was completed in 1967. The support materials are concrete, steel, and brick; the finishing materials are travertine, glass, teak, and anodized aluminum. Of the 24,000 total square feet, 14,000 is used as gallery space. The building sits on 5 ½ acres of property.
Links: www.kreegermuseum.org
1,269 views