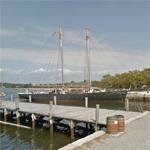 L. A. Dunton was modeled after a ship designed by Thomas F. McManus and was among the last large, purely sail-powered fishing vessels built. She was later equipped with an engine and had been adapted for use primarily as a motor vessel before being acquired by the Mystic Seaport Museum in 1963. An initial restoration in 1963-65 returned the rig and stern to their original configuration, while subsequent restorations between 1974 and 1985 returned her to a more fully authentic appearance. L.A. Dunton was declared a National Historic Landmark in 1993.
Links: en.wikipedia.org
570 views