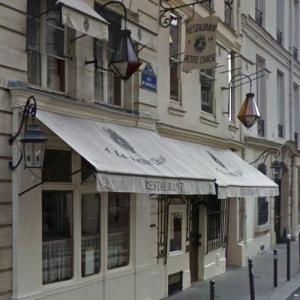 By LancelotLink @ 2010-08-16 07:47:31
@ 48.8538739, 2.3272622
Paris, France (FR)
The restaurant takes its name from the transformation of an old French word "cheze" of latin origin, casa meaning isolated house. The first construction of this building dates from 1610 and was located on the samall patch called "the little Louvre" near Grenelle. Between 1652 and 1680 the house has been raised.It is the one which still exists. Through recorded sales of the building we are certain that already in 1680 a certain Georges Rameau was selling wines in this very spot. With the wines, some food was being served and has been served since.
Links: www.alapetitechaise.fr
769 views