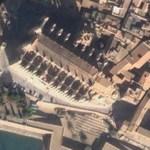 La Seu is a landmark of the city, and as we said on our opening page it will undoubtedly be the first recognisable landmark that you see on the final approach before landing at the nearby Son Sant Joan International airport, and the sight of it from the air never ceases to take your breath away.

Tradition has it that as King and his army were sailing towards Majorca a great storm arose that threatened to sink the fleet. James is said to have prayed for the storm to pass, and vowed that if he landed safely, he would build a great Cathedral in honour of the Virgin Mary. Symbolically on New Year's Day 1230, a day after the fall of Palma, the foundation stone of the Cathedral was laid on the site of what was the city's main mosque.

The Cathedral is actually dedicated to San Sebastian, the patron saint of Palma, and contains relics and pieces of the True Cross in its treasury, also inside the Royal Chapel are the tombs of Kings James II and James III of Mallorca.

Visitors to the Cathedral enter through a small side door which, after passing through a small museum, leads to the nave looking towards what is still one of the world's largest stain glass windows containing 1,236 pieces of glass, and measuring almost 12m across.
1,038 views