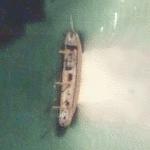 By Hinkkanen @ 2006-06-26 14:16:08
@ -51.68873, -57.804072
Stanley, Falkland Islands (Malvinas) (FK)
This Iron ship was built in Sunderland, England in 1879. She came to grief of Cape Horn in 1913 in severe gales losing cargo and men overboard. Unfortunately she also hit a rock on approaching Berkeley Sound, East Falkland and was holed. Condemned as unfit for repair she was sold to the Falkland Islands Company and used as a warehouse moored at the east jetty in Stanley. Eventually she broke free from her moorings in 1936 and drifted to her current position at Whale Bone Cove. Picture here.
Links: www.falklands-museum.com, en.wikipedia.org
2,412 views