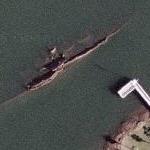 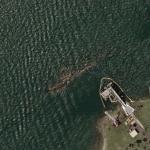 By kjfitz @ 2006-04-30 11:18:27
@ 21.368871, -157.962461
Pearl Harbor, Hawaii (HI), US
Utah's career as both a battleship and target ship spanned three decades and included nationally significant service with international implications, including the American landings at Veracruz, Mexico in 1914, and World War I service. Utah's alteration from battleship to auxiliary ship (target and gunnery training) because of conditions dictated by the Washington Naval Treaty of 1922 was part of a disarmament program with a considerable impact on the U.S. Navy, as well as many other nations' navies. Japanese disappointment over the Treaty contributed to sentiments leading to the outbreak of World War II.

She was sunk in the attack on the United States Pacific Fleet at Pearl Harbor on December 7, 1941. The battle-scarred and submerged remains of the battleship are the focal point of a shrine erected by the people of the United States to honor Utah's crew, 58 of whom lost their lives while trying to save their torpedoed ship. Along with the submerged hulk of USS Arizona on the other side of Ford Island, Utah is a frozen moment of time, lying much as she did in the immediate aftermath of the Pearl Harbor attack. While Pearl Harbor and its surrounding bases were repaired and ultimately modernized after the Japanese attack, Utah, like Arizona, was not. A surviving, largely unaltered casualty of December 7, 1941, the ship is now a national shrine and memorial to the memory of her crew. The memorial is located on Ford Island, a military installation. Procedures for visiting the memorial are contained on the USS Utah web site. Persons not having internet access should contact the Commander, Navy Region Hawaii Community Relations Officer at (808) 474-4746/471-0281 for instructions. The exposed starboard side of the ship is visible by water from tour boats.