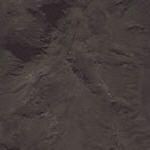 Laki is part of a volcanic system, centering on the Grímsvötn volcano and including the Eldgjá canyon and Katla volcano, and lies between the glaciers of Mýrdalsjökull and Vatnajökull, in an area of fissures which run in a south-west to north-east direction.

Over six years, in 934-940, the Laki system produced a very large volcanic eruption, as a flood basalt in the Eldgjá eruption, which released 19.6 cubic kilometres (4.7 cu mi) of lava.

The system erupted again over an 8 month period during 1783-1784 from the Laki fissure and the adjoining Grímsvötn volcano, pouring out an estimated 14 km3 (3.4 cu mi) of basalt lava and clouds of poisonous hydrofluoric acid/sulfur-dioxide compounds that killed over 50% of Iceland's livestock population, leading to famine which killed approximately 25% of the population.
Links: en.wikipedia.org
666 views