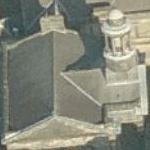 By kkeps @ 2011-12-25 18:05:05
@ 54.04897753, -2.80162914
Lancaster, United Kingdom (GB)
Lancaster City Museum is a museum in Lancaster, Lancashire, England. It is housed in the former town hall in the Market Square and includes the museum of the King's Own Royal Regiment (Lancaster). The museum was founded in 1923, and its collections illustrate the archaeology and history of the city and surrounding areas. Among its highlights is the Lancaster Roman Tombstone, a memorial dating from c. 100 AD which was found locally in 2005. It depicts a Roman soldier on horseback with a decapitated opponent at his feet, and is described as "an iconic piece of Lancaster's dramatic past [giving] a crucial insight into the history of the county."
Links: new.lancashire.gov.uk
399 views