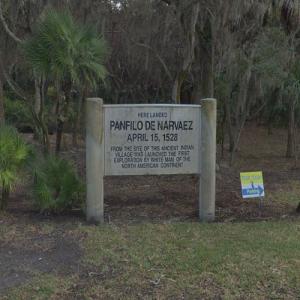 By tallturtle82 @ 2020-01-30 12:33:31
@ 27.7885214, -82.7525558
St Petersburg, Florida (FL), US
The Spanish Narváez expedition of 1527 was initially led by Conquistador Pánfilo de Narváez. Narváez passed away in 1528 but the remaining party continued its exploration throughout the Gulf Coast, Texas and Mexico City. The landing marks the first known Europeans and the first African, to see the Mississippi River, and to cross the Gulf of Mexico and Texas. Only three survived the expedition.
Links: discoverfloridatours.com, www.trailoffloridasindianheritage.org
149 views