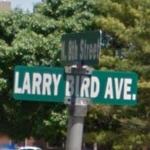 Larry attended Indiana State from 1976 to 1979 where he led the Sycamores to the NCAA Tournament and championship game for the first time. Bird and the Sycamores lost to Ervin "Magic" Johnson and the Michigan Spartans in the 1979 championship game and from there a friendly rivalry between Bird and Johnson began. Despite the loss, Bird won the Naismith Award as the top player that year. The hick from French Lick averaged 30.3 points, 13.3 rebounds and 4.6 assists per game leading the ISU team to a 81-13 record during his time.
Links: gosycamores.com
413 views