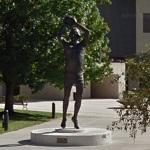 Larry Bird (12/7/1956) is one of the most well-known basketball players of all-time. Bird grew up in French Lick playing basketball constantly. In high school he became the school's all-time leading scorer. When it came time for college in 1974, Larry chose to attend the University of Indiana. After less than a month on campus, Larry dropped out as he found Bloomington overwhelming.

In 1975 Bird enrolled at Indiana State where he embarked on an amazing three year run with the Sycamores. Bird averaged 30.3 points, 13.3 rebounds and 4.6 assists for his career and earned numerous awards. Bird led the Indiana State team to the 1979 NCAA tournament championship game where Larry and the Sycamores would loose to Magic Johnson and Michigan State. After the game, Larry Bird became a house hold name.

The Celtics drafted him six overall in the 1978 NBA draft and the rest is history.
Links: gosycamores.com
543 views