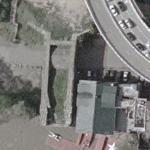 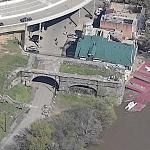 The Alexandria Canal played a short, but important, part in the history of commercial navigation on the Potomac River. Congress granted a charter to Alexandria Canal Company on May 26, 1830. When completed, the Alexandria Canal crossed the Potomac River in an aqueduct bridge over 1,000 feet long between Georgetown and Rosslyn then ran on level ground seven miles to the edge of Alexandria terminating in a large basin. The Potomac Aqueduct Bridge, built under the direction of Major William Turnbull and Lieutenant Maskell C. Ewing, both of the U.S. Topographical Corps, was a large wooden trough supported by eight solid masonry piers, a major undertaking at the time. In 1845, the canal company completed the construction of the four lift locks at Alexandria which lowered canal boats approximately 38 feet to the Potomac River where they discharged their cargoes onto wharves or directly into sailing vessels.
Links: oha.ci.alexandria.va.us, en.wikipedia.org
2,616 views