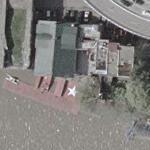 Founded in 1869, Potomac Boat Club is the oldest and one of the best known rowing clubs in the Washington, D.C. area. It is home to some 260 senior members, ranging from recreational rowers to Olympic athletes. PBC features several successful competitive programs for scullers and sweep rowers, and has served as the home of Washington-Lee High School crew under a cooperative agreement going back more than 50 years.

Located in the shadow of Key Bridge along the D.C. waterfront, the historic PBC boathouse has survived several floods, numerous hurricanes, and the catastrophic fire that destroyed the Washington Aquedect, the remaining abutment of which shelters many of the members' rowing shells.

Aside from providing the training ground for a long list of highly successful national team, club, and masters rowers, PBC is perhaps best known as the host of the Scullers' Head of the Potomac, a fall regatta which began in 1981.
Links: www.potomacboatclub.org
1,273 views