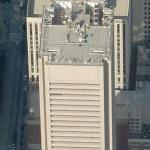 The building is located in the block surrounded by Lombard Street, Charles Street, Pratt Street, and Light Street.

The building's primary occupant was asset manager Legg Mason, Inc., until 2009. In February 2007, Legg Mason announced that it would be moving to a new skyscraper in the Inner Harbor East development, a move that was completed during summer 2009. As of 2010, the "Legg Mason" sign is no longer at the top of the building. Previously, the building was occupied by USF&G, but they sold the building when they were purchased by the St. Paul Companies, which is now a unit of The Travelers Companies.

In 2011 the building will become the home of Baltimore Based law firm Ober Kaler.
Links: en.wikipedia.org
667 views