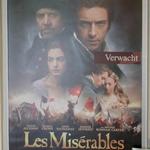 By adrbr @ 2013-02-28 18:04:31
@ 51.966898, 5.6651
Wageningen, Netherlands (NL)
Les Misérables is a 2012 British musical drama film produced by Working Title Films and distributed by Universal Pictures. The film is based on the musical of the same name by Alain Boublil and Claude-Michel Schönberg which is in turn based on Les Misérables, the 1862 French novel by Victor Hugo. The film is directed by Tom Hooper, scripted by William Nicholson, Boublil, Schönberg and Herbert Kretzmer, and stars an ensemble cast led by Hugh Jackman, Russell Crowe, Anne Hathaway, and Amanda Seyfried. The film tells the story of Jean Valjean, an ex-convict who becomes mayor of a town in France. Soon exposed, Valjean agrees to take care of Cosette, the illegitimate daughter of the dying Fantine, but as a fugitive must also avoid being captured again by police inspector Javert. The plot spans 17 years and is set against a backdrop of political turmoil, which in the film culminates in the June Rebellion of France.
Links: en.wikipedia.org
256 views