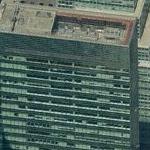 By kkeps @ 2011-12-25 18:08:43
@ 40.76030988, -73.97214519
New York, New York (NY), US
Lever House, designed by Gordon Bunshaft and Natalie de Blois of Skidmore, Owings and Merrill and located at 390 Park Avenue in New York City, is the quintessential and seminal glass-box skyscraper built in the International style according to the design principles of Ludwig Mies van der Rohe. Completed in 1952, it was the first curtain wall skyscraper in New York City. The 92-meter-tall building features an innovative courtyard and public space. Most of the headquarters of corporations on and around Park Avenue adopted this style of building. In 1961 it was copied as the Terminal Sud of Paris-Orly and in 1965 as the highrise of the Europa-Center in Berlin.
Links: en.wikipedia.org
1,044 views