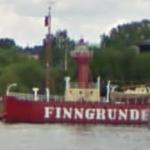 She was the second Finngrundet lightvessel, built in Gävle, Sweden in 1903 and replacing one dating from 1859. She was moored on the Finngrund banks in the Baltic Sea 40 nautical miles (74 km) northeast of Gävle during the ice-free part of the year.

She was extensively modified in a refit in 1927 at Öregrunds Ship och Varvs AB, the original paraffin light being replaced with an AGA beacon. The fog bell was augmented with a "nautophone" fog signal and an underwater fog signal.

Further modifications in 1940 work included the addition of wireless communication along with equipment for her to function as a weather station, and the electrification of her light.

Her final refit was in 1957 when the deckhouse and crew space were modified.

She was replaced in 1969 by an unmanned caisson lighthouse and became a museum ship attached to the Vasa Museum.
Links: en.wikipedia.org
463 views