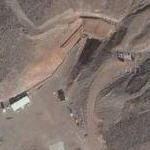 In 1983 REECo miners, used a 256-ton tunnel boring machine to drill a 750-foot tunnel into Little Skull Mountain as part of the project. The tunnel was later used by the Air Force to investigate equipment and methods for post-attack "dig-out" from underground missile complexes.
Links: www.thoughtsandplaces.org
3,129 views